Human sacrifices have been practiced for thousands of years by many cultures in the world, including the Chinese, Carthaginians, Celts, and ancient Hawaiian cultures. It is also known of human sacrifices in indigenous peoples and cultures of pre-Columbian America, such as the Olmecs, Teotihuacans, Mayans, Toltecs, Aztecs, Muiscas, Mochicas, and Incas. 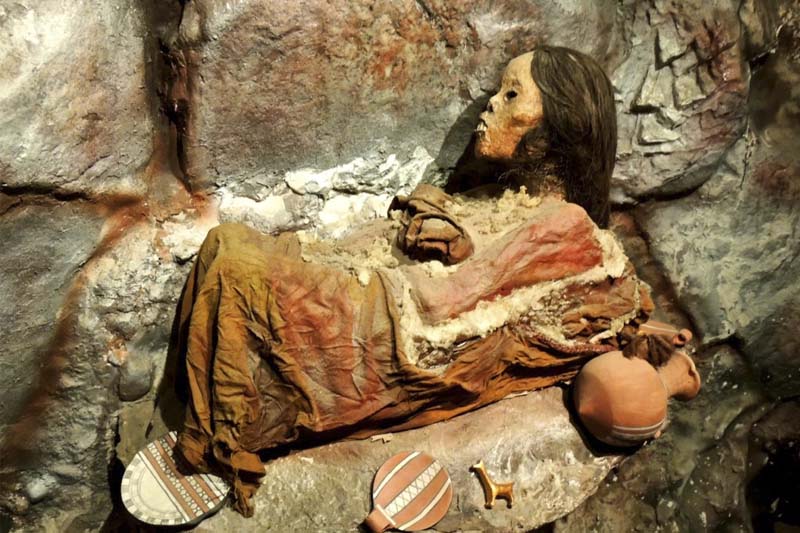 The lady of Ampato, better known as the “Juanita Mummy”

The Capacocha (Sacrifice of children)

In the Inca Civilization the Capacocha was practiced, it was a ritual in which children were sacrificed; can be translated as “real obligation”.

For the Incas, death was the beginning of another life, the chosen ones for the sacrifices were boys and girls, who were considered pure, these had to belong to good families, generally they were children of caciques. The historian Carmen Martín, indicates that they were carefully chosen children of great beauty from all over the empire; with respect to age, they were between 6 and 8 years old, although they could also be older. He reports that “death came to them without pain”, they felt nothing probably because they were drugged with coca leaves or chicha, and when they were deeply asleep, they were exposed to very low temperatures in the summits of the glacial mountains and they died frozen.

In Llullaillaco volcano in Argentina, the bodies of 3 children, two 8 years old, one 12 and a 15 year old girl were found. The children dressed in a sumptuous manner, unlike the girl, who was probably buried with them to take care of them.” This destiny was imposed from birth and accepted by them as a duty. These children, considered pure beings, were bearers of the messages of their people. For this ritual they prepared months in advance and wore jewels and fine clothes.

Once in place, the children were intoxicated, then died frozen, killed by strangulation, or with a heavy blow to the head. Then they were accommodated in an underground well, luxuriously dressed, with personal adornments, fabrics, food and a series of articles of daily use.

Other studies point out that some of the ritual massacres in the Andes range back to pre-Inca times, but their numbers and sophistication increased with the expansion of the empire from its capital Cusco. These studies indicate that Capacocha (sacrifices of children) was used as a means of social control. According to these, the tombs acted as warnings designed to instill fear in the conquered peoples.

Juan de Betanzos, a 16th century Spanish chronicler, wrote that the Inca Pachacútec had a large number of children buried alive as an offering at the end of the remodeling of the Temple of the Sun. He also writes that when the Inca died, a thousand children were buried with him and a thousand girls between 4 and 5 years.

The chronicler of the time Bartolomé Álvarez, narrates that some very young women destined to Capacocha, accepted their destination with pleasure, but those who did not wish to die, were drugged or intoxicated and then sacrificed.

In 1639 the priest Barnabas Cobo wrote “they were killed by strangulation on a rope, sometimes they were drunk before being killed”. In 1572 Pedro Sarmiento de Gamboa, I affirm that on the “Capacocha” party, children were immolated before the idol of Huanacaure; finally Guamán Poma de Ayala (16th century), wrote that the Capacocha was a celebration held twice a year, in which children were sacrificed.

However, we have to take into account that many Spanish chroniclers, tried to justify the crimes and the devastation of the invasion, giving the Inca civilization a bad reputation, showing the Incas as murderers and sacrificers of children.

The Inca culture covers many aspects. Its beautiful architecture still amazes us with jewels like Machu Picchu. Do not wait any longer and know the Inca wonder. For more information about the trip to Machu Picchu, please contact us at info@boletomachupicchu.com.