The archaeological site of Choquequirao is known as ‘The Sacred Sister of Machu Picchu’ because of the similarity between both Inca sites. Currently, the only way to get to this place is through a 4-day trekking route.

Know all the information you need to visit Choquequirao. Visit this new archaeological site, as incredible as Machu Picchu.

What does Choquequirao mean?

Choquequirao is a Quechua word that means ‘Cradle of Gold’. The name comes from the nomination of a hill near the archaeological site.

Choquequirao is located in one of the fringes of the mountain Salkantay, north of the Apurímac River. It is currently located in the district of Santa Teresa, province of La Convención, department of Cusco, Peru.

How high is it?

Choquequirao is located 3,033 meters above sea level. Due to its location, it is presumed that this Inca enclosure served as a checkpoint between the main Inca sites such as Pisac, Cusco and Machu Picchu.

Choquequirao has only been excavated 30%. In spite of this, it already has several very important Inca constructions:

How to get to Choquequirao?

The only way to get to Choquequirao is by land. Currently, the main route is going to the town of Cachora (2,903 masl), 3 or 4 hours by road from the city of Cusco (2 hours from the city of Abancay).

There, start the hike to the Inca archaeological site. The route crosses important points such as Capuliyoc, Maranpata and Sunchupata. It is estimated that from Cachora, after 32 kilometers on foot you will reach Choquequirao.

The walking time from Cachora to Choquequirao on average is from 10 to 12 hours. A cable car is currently being built that would significantly reduce this time.

The archaeological site of Choquequirao is located at 3,033 meters above sea level. The climate is temperate with cold at night. However, the tourist will not remain in the Inca site until after sundown.

However, the road that leads to the summit of Choquequirao is hot due to the proximity of the Apurímac canyon. It is estimated that the temperature at the archaeological site varies between 5º C and 25º C.

How is the flora and fauna in Choquequirao?

Choquequirao is home to a variety of animals and birds such as the condor, foxes, vizcachas, pumas, hummingbirds, spectacled bears and the cock of the rocks In addition, like Machu Picchu, there is a great variety of orchids.

The most usual way to get to Choquequirao is through the trekking route of 4 days and 3 nights. You can hire this tour online or directly in an agency in the city of Cusco.

The tour to Choquequirao in 4 days and 3 nights is like this:

There is another tour that connects Choquequirao with Machu Picchu in 8 days and 7 nights. In total 115 kilometers of history and adventure are covered. 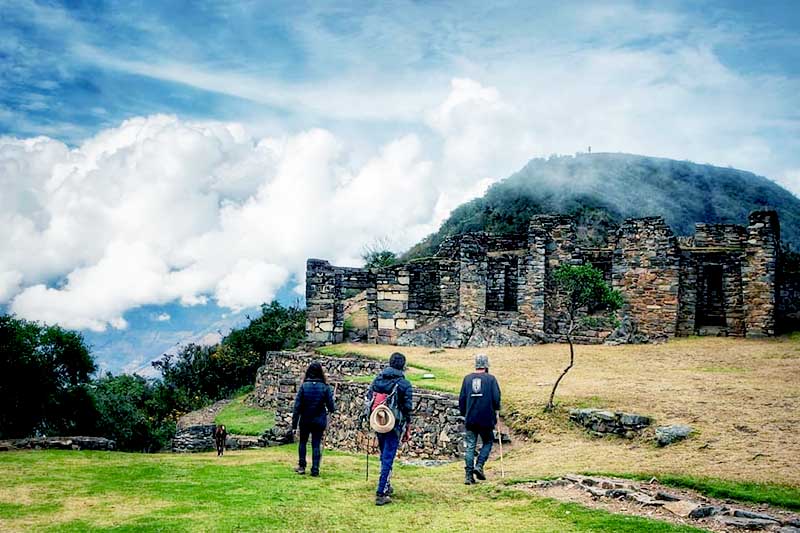 Choquequirao on its own and without a tour?

Although many tourists choose to arrive in Choquequirao with a tour, it is also possible to do it on their own. To achieve this, you must follow the usual route and pay the entrance fee at the entrance to Choquequirao.

Important information to get to Choquequirao on your own:

What to take on a trip to Choquequirao?

Whether with a tour or on your own, there are some things necessary for all tourists visiting Choquequirao:

When is the best time to travel to Choquequirao?

The best time to travel is between April to October. Choquequirao has two stations:

Tips to go to Choquequirao

As well as Machu Picchu, many people knew the existence of Inca archaeological remains in Choquequirao. However, it was Hiram Bingham (the discoverer of Machu Picchu) who in 1909 made known to the world the importance of the Inca site..

It was not until 1970 that excavation work began. Currently, it is estimated that only 30% of Choquequirao is unearthed and put on display to the public.

How much does the entrance to Choquequirao cost?

If you travel by your own account you will have to pay the following rate at the entrance to Choquequirao:

How much does a tour to Choquequirao cost?

The price of a 4-day, 3-night tour to Choquequirao depends on the number of visitors in a group.

Cost of a tour to Choquequirao on average:

What is the admission schedule?

Choquequirao opens its doors every day from 7 am to 5 pm The ticket allows you to spend the night in a camp located near the Inca site.

What is the difficulty of the Choquequirao tour?

The trekking route to Choquequirao has a medium-high difficulty. From the town of Cachora to the archaeological site, a total of 31 kilometers are traveled, and another 31 kilometers. The hike includes a descent and a steep climb.

What does a tour to Choquequirao include?

The tour to Choquequirao depends on each tourism agency. In general, these include:

Choquequirao receives 20 tourists on average per day (Machu Picchu receives 5 thousand). With the construction of the new cable car, this number will increase to 3 million per year.