The Sanctuary of Machu Picchu not only houses a large archaeological complex but also it is home to an impressive number of natural species of flora and fauna, some endangered; such as, the spectacled bear and several native plants.

Surely, you knew that Machu Picchu was elected one of the new Seven Wonders of the Modern World in 2007, but perhaps didn’t know that was chosen as the Best Green Destiny World awarded by the World Travel Awards (WTA) in 2012. With the best record since 1983, UNESCO declared Heritage Natural and Cultural of the Humanity. Pablo Neruda, in 1943, described the wonder before his eyes; an empire that raised a stone city in the Peruvian Andes. 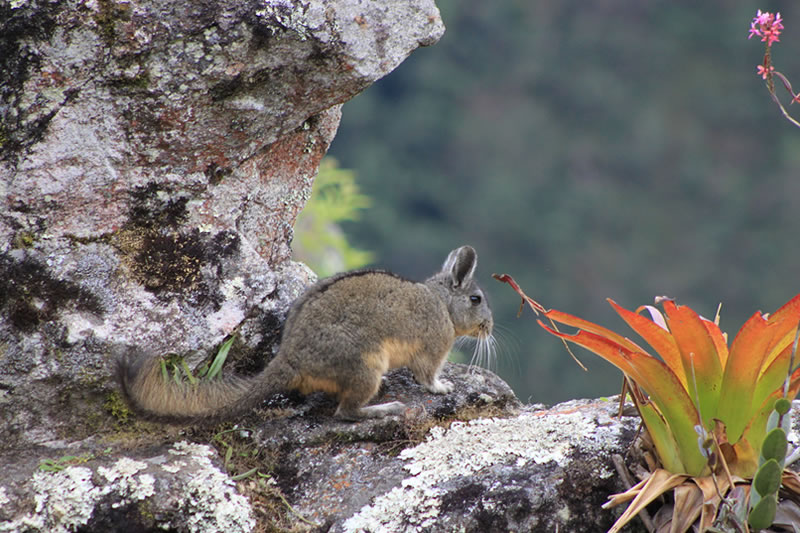 Vizcacha in the Sanctuary of Machu Picchu

The Historic Sanctuary of Machu Picchu, has more than 32 thousand 592 hectares of beautiful landscapes, habitats harboring an enormous diversity of wild animals and plants. Besides containing archaeological remains built in harmony with the landscape.

Known as one of the most diverse ecological niches of Peru. It can be found up to 13 life zones, making it possible a unique biodiversity in this part of the world, giving a great environmental value.

In the flora, stand large tracts of forest of native trees, among which are the Q’euña, intimpa, cedar, alder and pisonay; which create ideal habitats with huge food source for numerous wildlife. With landscapes decorated by a huge number of species of ornamental plants, as the more than 420 species of orchids (many of them endemic), begonias and more.

The strategic location of Machu Picchu between the Andes and the Amazon, allows the presence of microclimates that lead to the formation of fragile ecosystems that make life possible, small species; as insects, birds and mammals, among them stand, the “Cock of the Rocks” (rupicola peruviana) Peru’s national bird, the andean bear or spectacled bear, the condor, the kettle from the mountain, the dwarf deer, hummingbird of sword peak, river otter, Andean fox, the capisos, toucans and torrent duck, as the most representative; among these are some endangered species.

The Andean bear or spectacled bear is categorized as vulnerable both in Peru and globally, it is estimated that populations of spectacled bears in Peru will decrease by 30 percent in the next 30 years.

Another species that although being recovered, is still in the status of threatened species, is the cock of the rock (Rupicola peruviana).

The decrease in number of these species is due to the loss of their habitats, because of forest fires caused by human activity, plus persecution and hunting which they are subject. In 2014 was initiated the monitoring the occupation of spectacled bear searching for the conservation and reproduction of the species.

New Species of Flora and Fauna

While there are species that must be protected in a special way, the good news is that by 2014, the number of species in the Historic and Natural Sanctuary of Machu Picchu, increased by 5%.

Machu Picchu continues to surprise us; in the last four years we reported on new discoveries in natural species such as Epidendrum Astetei, orchid spotted by specialized biologists to 3780 meters of altitude, in full bloom.

Also in May, a new species of lizard was discovered, researchers named it as the “Andean lizard Machu Picchu“, demonstrating the importance of this sanctuary, which in the past decade has contributed to wildlife world, no less than 46 new species.