The llamas are perhaps the most beloved mammals of the Andes; The llamas live in the mountain regions of Chile, Argentina, Bolivia and Peru, where they contributed greatly in the development of the vast Inca Empire. Nowadays they captivate the curiosity of the people who visit the Inca City of Machu Picchu.

By having a close encounter with them, you will realize that these animals can express a range of emotions that can be perceived in their gestures and in their huge eyes.

Llamas, inhabitants of the Andes

The low oxygen of the places at great heights, makes the breathing of most animals very difficult, but the llamas can live comfortably at these altitudes, in fact they are the inhabitants par excellence of the Andes, and this is because their Blood has a large amount of hemoglobin, allowing them to absorb the scarce oxygen of this environment.

The llamas are independent, peaceful and friendly animals. They are very sociable animals, who need the company of others of their kind. They will allow you to approach and observe them, but do not invade your space.

Do I have to be careful with the llamas?

Yes, llamas that feel threatened, are disturbed, or if they want to free themselves from unwanted attention, expectorate a powerful spit; In rare cases these are aimed at people, but it happens, so we recommend you keep your distance (if you do not know the llama).

What is the best time to see the llamas of Machu Picchu?

If you have the opportunity to enter the Inca City of Machu Picchu very early, you can enjoy the company of these beautiful animals as much as possible. Its 2-toed feet with leather soles, allow you to navigate the rocky roads of Machu Picchu with ease, agility and avoiding erosion; This is why some “environmentally conscious” trekking companies often use llamas as pack animals. Since their legs cause less impact, for the native environment.

Many of the llamas of Machu Picchu are accustomed to visitors and seem to pose for cameras that want to capture an image of them. Have your camera on hand, you never know when a llama will poses for you. 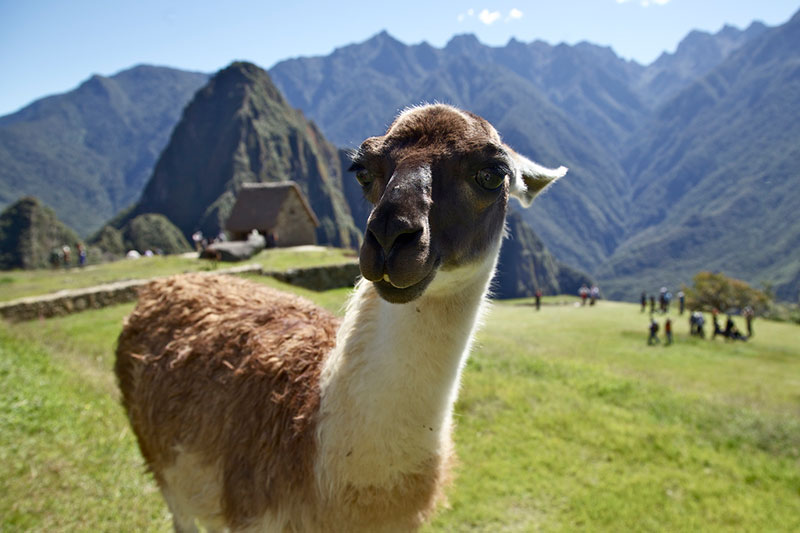 The origin of the llamas

Characteristics of the llamas

The llama is a domestic artiodactyl mammal of the family Camelidae; Has long, thick hair that keeps it warm during the cold days in the mountains. The predominant colors in the llamas are white and brown, but they can be of various colors and combinations, each llama has its own style. It abounds in the altiplano of the Andes of Peru, Bolivia, Ecuador, Argentina and Chile.