The Inca empire lasted just two centuries. It is not known for sure when the empire began as such. The truth is that it expanded by thousands of kilometers, reaching part of the current territories of Peru, Bolivia, Ecuador, Colombia, Chile and Argentina. Its first ruler was Manco Cápac (1200 – 1230) and the last was Túpac Amaru I (1570 – 1572). The apogee of the empire was achieved by the famous Inca Pachacutec (1430 – 1478).

When did the Inca Empire begin?

The Incas settled in Cusco from the altiplanic regions around 1230. Since then, they have made strategic alliances with local people. Little by little they grew in number until the sovereign Pachacutec (who had Machu Picchu built) founded the Inca empire in 1430. This era was characterized by large-scale territorial expansion as well as economic, architectural, and cultural development. 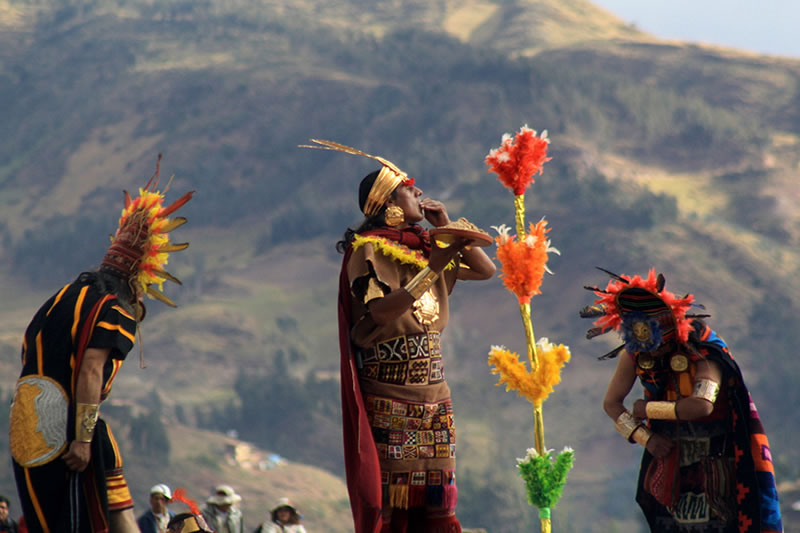 Staging of the Inca worshiping the Sun God

How many were the Inca rulers?

Historians consider that there were 18 governors, from their settlement in Cusco under the leadership of Manco Cápac. Of these, eight were the rulers of the pre-imperial era, six were the emperors, and four led the Inca rebellion in Vilcabamba.

How did the Incas start?

The Incas did not invent the writing, so there is no record of how they started. When the Spanish conquered their lands, the written history of the Incas began.

About the origin there are two legends that explain the arrival of the Inca people to Cusco from the cold lands of the altiplano: a) the Legend of the Ayar Brothers and b) the Legend of Manco Cápac and Mama Ocllo.

After the death of Manco Cápac, its first ruler, the Incas timidly expanded until the arrival of Pachacutec who founded the great empire of the Incas. It was this last Inca who founded the wonderful Inca city of Machupicchu.

How did they expand their empire?

Pachacutec was the first ruler of the Inca empire. It was he who initiated the great expansionism in the north and south. He created alliances that allowed him to dominate the territory without using force. He came to conquer the territory of Peru, Ecuador and Bolivia as well as half of Chile and part of Argentina and Colombia.

His son Tupac Yupanqui continued the process of expansion of the empire towards the north, reaching its most extensive expansion.

How was the fall of the empire?

Huayna Cápac, son of Tupac Yupanqui, was unable to establish a successor before his death. This caused a confrontation between his sons Huáscar and Atahualpa. It was in this context of civil war that the Spanish arrived.

The Spanish imposed themselves on the Incas mainly for the advantage of their weapons and for their alliances with the peoples subjected to force by the Incas who sought to free themselves from their oppressors. The last rebel Incas in Vilcabamba were unable to regain lost territory. Finally the Spanish occupied Cusco and the colonial system was established.