The Sacred Valley of the Incas offers a glorious start to your visit to Cusco and Machu Picchu; Sublime climate, overwhelmingly beautiful landscapes, colonial towns, ancient Inca settlements and very friendly people, reflect why so many people travel thousands of miles to visit this valley. These colonial cities, mostly inhabited by artisans, artists, farmers and people who are fed up with the bustle of the city, are one of the best places to visit not only in Peru but in South America.

If you have some free days in Cusco, we recommend you to explore this valley at the foot of the Andes.

Some of the archaeological sites of the Valley need a special tourist ticket, this can be bought in Cusco or directly on the spot.

What to see in the Sacred Valley?


The ruins of Pisac

The ruins of Pisac are a must-see as you pass through the Sacred Valley, ignorance of these ruins makes many of the people who visit the village of Pisac overlook this spectacular excursion; However, this “inadvertence” gives you the opportunity to explore something unique that not many people know about. If you visit Pisac, be sure to include the ruins of Pisac in your itinerary , it can be the start or the highlight in your trip through Cusco and Machu Picchu. The ruins are located above the village of Pisac at one hour from Cusco, and it is one of the best archaeological sites in Peru. The name Pisac, derives from the Quechua word “Pisaca” that means partridge; Some historians suggest that the agricultural terraces on the slopes of the mountain represent the wings of a partridge. In this place is also the largest known Inca cemetery.  TOP ▲ 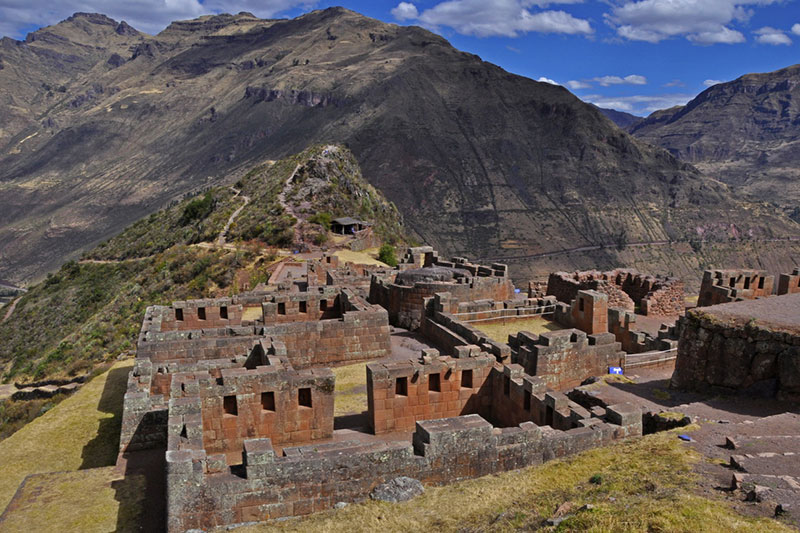 At 40 minutes from Cusco at the eastern end of the Sacred Valley lies the small town of Pisac. Visited in most cases by its numerous Inca ruins, but also by its market Why is it so popular and what can be found there? It is known that in time of the Incas Pisac was a place of great agricultural importance, used to grow corn, quinoa, potatoes, amaranth, etc. Francisco Pizarro and the conquerors destroyed Pisac at the beginning of 1530, and the modern city of Pisac was built in the valley by the viceroy Toledo by the 1570. The first records show that the main square became an important commercial zone and the market was born Of Pisac as we know it. The Pisac market can be found every day of the week; But on Sunday, the market is much bigger and until the last inch of the square is occupied by sellers. Take your time to wander through the craft and weaving sections, buy some of the fine alpaca garments, and remember that you can haggle.  TOP ▲ 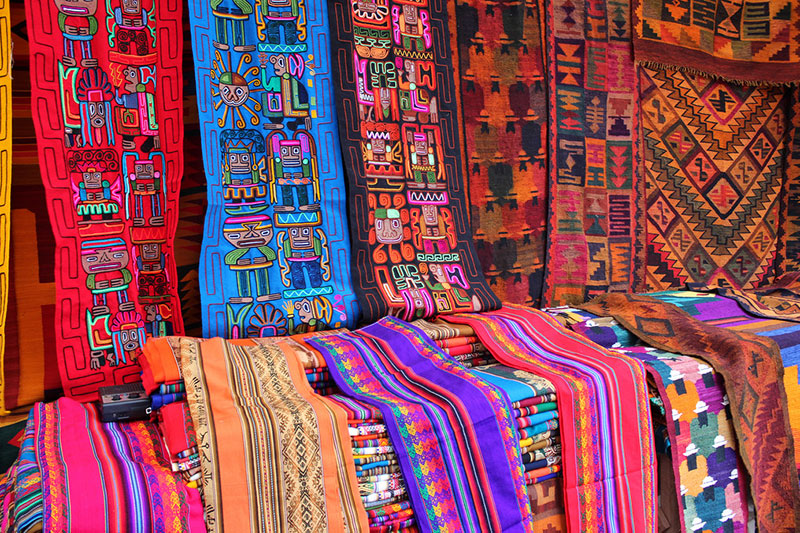 The ruins of Ollantaytambo

In the 10th century, the Inca Pachacútec conquered and began to rebuild Ollantaytambo, the former Inca administrative center and gateway to the “Inca Trail” that led to Machu Picchu. The city became the residence of the Inca nobility; After the death of the Inca Pachacutec, Manco Inca used the city as a refuge against the Spaniards; Originally built for religious purposes, would become a fortress to repel the attack of the invaders. The main attraction of the city of Ollantaytambo is the fortress of Ollantaytambo, is in the place known as the Temple of the Hill; It is also the most common starting point for people who walk the Inca Trail. In the complex you can also see a series of discarded stones, known as the stones tired, very close to the Sun Temple. This unfinished temple is composed of 6 monoliths, each weighing 50 tons and brought from a nearby quarry.  TOP ▲ 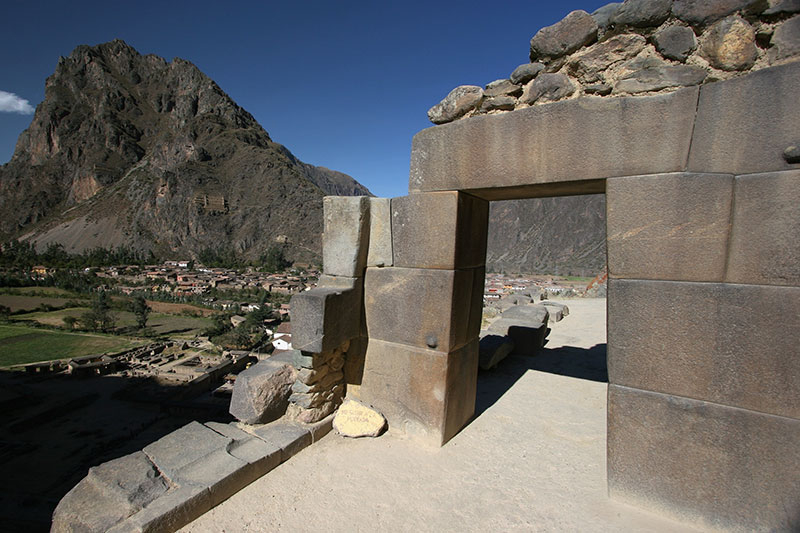 The town of Chinchero

The small rural town of Chinchero is located between Cusco and Urubamba, at 3,762 masl; 350 m above Cusco. This little town forgotten by many, gives you some very interesting points to see. There is a large display of Inca architecture, ruins and megalithic carved rocks. Chinchero is also known as the home of Peruvian fabric and has a colorful market, much smaller than that of Pisac, but that will give you the opportunity to make a barter and to acquire beautiful souvenirs, crafts, textiles and others. The village also houses a beautiful adobe church, is located in the main square and can be visited every day. It is thought that the Inca Tupac Yupanqui, ordered the construction of numerous aqueducts and agricultural terraces, Many of which are still used today. The soil of Chinchero is one of the richest and most fertile of the Sacred Valley .  TOP ▲

The ruins of Moray

At 50 km from Cusco you can see the impressive Inca ruins of Moray, in a remote area of the Sacred Valley. These ruins are not mentioned in many guides of Cusco and the Sacred Valley, reason why it is one of the few places of valley that will not be flooded of visitors, being able to enjoy the place in peace. It is believed that the circular terraces that rise from the bottom of the valley were an agricultural research laboratory. Its depth, design and orientation regarding the sun, have a specific purpose. Each of the terraces has a temperature difference of 15 ° C (27 ° F). So it is believed that the Incas used terraces and different temperatures to test crops and experiment with them. They experimented with hybrid species, adapted and improved crops for human consumption. This is likely to be due to the many variations of the potato. Now Peru has more than 2,000 own potato varieties. Another interesting thing about the place is that the circular terraces of Moray, which resemble wells, are never flooded, even with the heavy rains of the region; So it is possible that there is a complicated drainage system beneath them. An excursion to the ruins of Moray can take you a full day, to take advantage of your time may include the visit to the salt marshes of Maras. You will be impressed by the vision and intelligence of the Incas. Take your time to assimilate and learn.   TOP ▲ 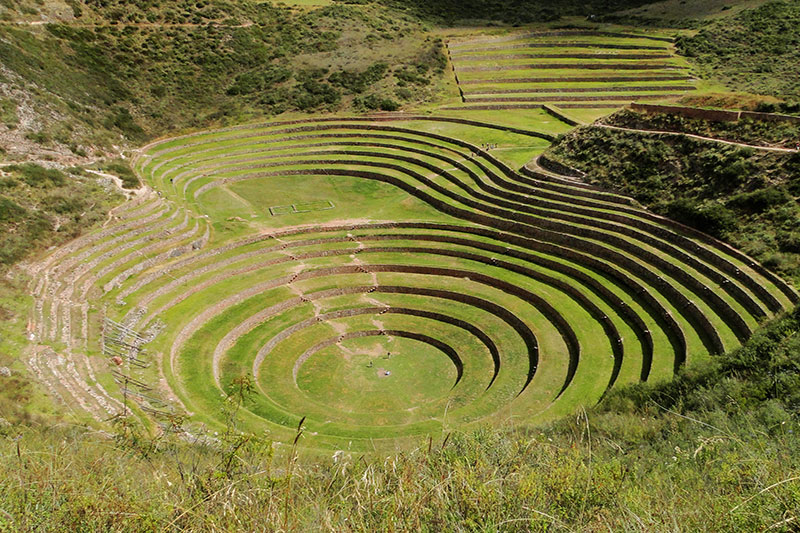 The salt flats of Maras

Placed in the middle of mountains, they seem of snow with the sun reflected on her; The salt flats of Maras are a true hidden beauty in the valley. Depending on the time of year in which you travel, you can see puddles of water in each section of the salt fields, shining like mirrors. Admiring the white salt rocks against the green background of the mountains is a sight you will not be able to see anywhere in the world. A private tour will allow you to see how the salt pits are kept and harvested; In addition, you can buy the product in the local market.   TOP ▲

The village of Tipón is located 30 minutes from Cusco and is famous for its traditional dish, “el cuy” (guinea pig), but also houses beautiful Inca ruins. The ruins of Tipón represent the most impressive architecture on the south side of the valley; Is on the Cusco – Puno highway and is relatively free of visitors. The state of conservation of the terraces of Tipón is very good, you will also find fountains and water channels finely designed. As you know the terraces were built for agricultural purposes, and the canals fed by a natural source above the site, provided fresh water to the whole place. Some of these channels are in use today. Although the Inca structures of Tipón, They do not have the extension of other Inca complexes, they are architecturally very well designed. If your itinerary allows you, take time to visit the magnificent scenery of these ruins.  TOP ▲ 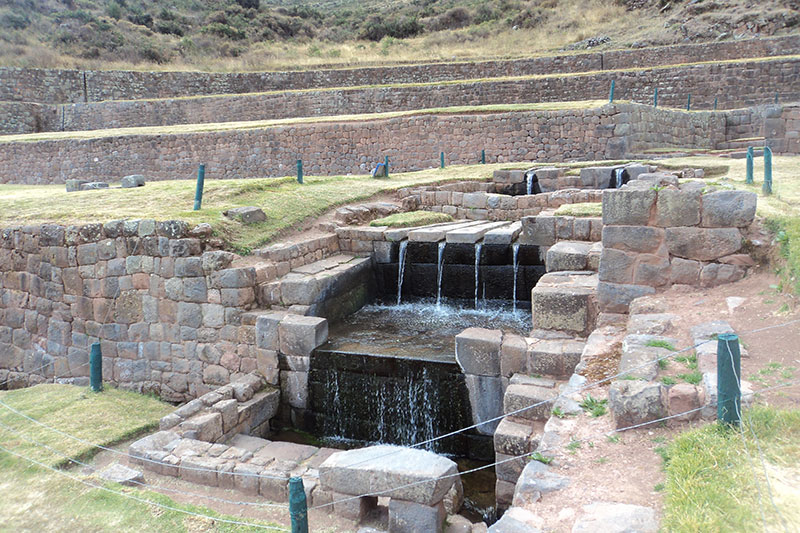 The temple of Huiracocha

If you travel through the Sacred Valley in a southerly direction, you will probably reach the small town of San Pedro de Cacha, the nearest rural village to Raqchi. This archaeological site houses several Inca structures. The Huiracocha Temple (also known as Raqchi Temple) was originally built as a checkpoint on the network of Inca roads (Qhapaq Ñan); This road system originated in Cusco and spread throughout the Inca Empire; But there are other speculations about the site, some say the original structure was a kind of barracks. Others suggest that the buildings served as a residence for religious and administrative officials. According to Inca mythology, Huiracocha was the “god” of life, creator of the sun, moon and stars. The temple should serve to honor and appease him. The temple measures 92 m. Long and 25.5 m. Wide. It was a 2 story building with windows, doors and a central wall of 18 to 20 m. Of height. The lower part is built of carved stones, while the upper part is made of adobe and mud. It is said that the Huiracocha Temple (Wiracocha) was designed in such a way that people had to walk through it in zigzag. There are 12 houses related to the temple; Possibly belonged to people of high rank, administrative and religious. To the west side of the temple you will find ceremonial baths, also you will find a great number of warehouses (approximately 150 qollqas). See also the artificial lake fed by a natural spring through stone fountains; It is more than likely that this lake was used for ceremonial purposes in Inca times. Of course and as in most Inca sites, this site was destroyed to build a Catholic church on it.  TOP ▲ 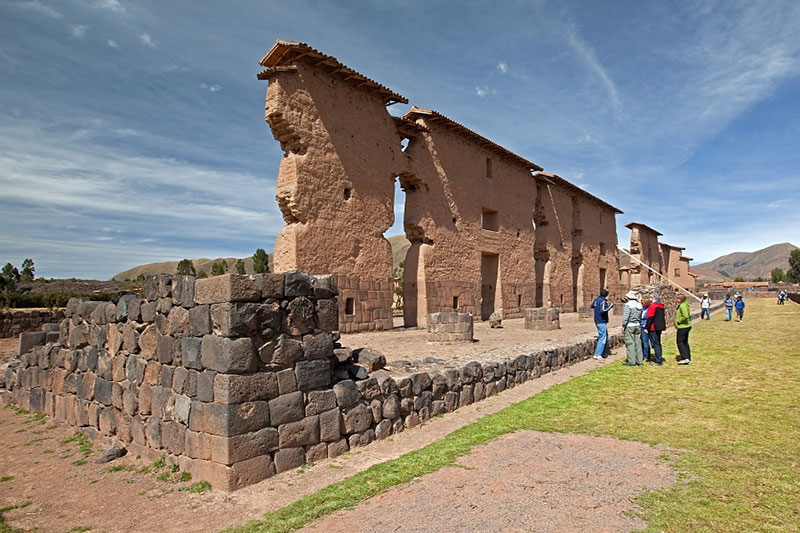 The Temple of Huiracocha Raqchi

“Awesome Tipón. Another must see in Cuzco.“

“It is incredible the management of hydraulic engineering of the Incas, I never thought to see something so advanced for the time; So much that today would be perfectly usable, it really is a very beautiful walk where you find the vegetation and a natural environment super cute.“